You are on the [cover page] of folder [Alexandra Park]

This fall, Shauna Kearns, having recently returned to Toronto from working with bake ovens (and with bricklayer apprentices) in Pittsburgh, got in touch with Jessa Reitsma from the Alexandra Park Neighbourhood Learning Centre (APNLC) to ask about the bake oven that the organization takes care of. (An interesting history of the APNLC is here). The conversation led to a plan to try a small fire in the oven, which has not been used for years. There had been reports that the chimney was blocked, but when Jessa and Shauna lit the fire, they had no problem. So they decided to try baking some of Shauna's sourdough bread on one of the last warm days of fall, Thursday Nov.12. 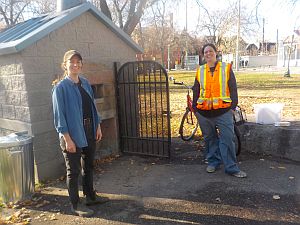 Shauna and Jessa in front of the oven

From Jessa: "Its magic:) the oven worked perfectly and the bread was delicious! I look forward to coming up with programming- there are a lot of out of work restaurant staff who may want to learn some new skills and we can absolutely cook many things in there, I believe."

From Shauna: "The bake was very successful!! We fit 9 loaves in the oven (swore it was 8 in but 27 minutes later we pulled out 9, so thinking this may be a magic oven..). It seemed to hold it's temp very well through the bake. Would be fun to experiment with loading something else in after the sourdough comes out next time! Definitely game to do some flatbread or pizza at some point before it gets cold. Though I anticipate we will do plenty of cold weather baking in this oven this winter if the stars align.." 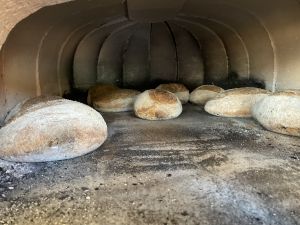 the bread in the oven 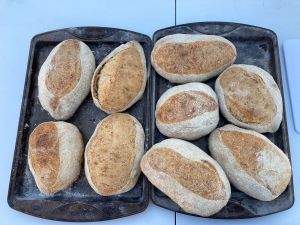 ready to hand around

Alexandra Park has many tents in it, some winterized, some not.

From Shauna: "The bread went to folks living in the park. We walked around to all the tents and gave it out to anyone who was interested."

Q: Do you get permits for use of the oven in your park/facility?
A: It was informal when last used, the parks supervisor gave Scadding staff the key

Q: How often does your group use the oven?
A: The oven has not been used in years (at least 5)

Q: Would you be interested in having an annual permit, ideally no-fee, that allows your group to use the oven on a regular basis (e.g. for monthly or weekly pizza or bake nights)?
A: Yes, we are interested, once the oven is fixed

The staff at Scadding Community Centre still have the key, but there are issues with the chimney, and unrelated other programs that currently don't include the oven. Arrangements with city permits are unclear, and there's a new Parks supervisor who has not yet been in touch. The oven has not been in use for some years.

The oven cap at Scadding/Alexandra Park needs to be removed because it may be blocked -- somebody may have stuffed in some junk or maybe there's a tiny nest of adorable baby raccoons in there.

Have you ever seen this type of cap and could give advice on how to get it off?

Response from Nigel: If theres no visible screws it could be cut off with a grinder fit with a cutting wheel. The oven only requires a spark arrestor in the flue to stop sparks heading into trees, almost impossible to clog. The chimney cap in the picture could be clogged with creosote, especially if they are burning garbage wood.

This oven was only used once in 2015 and there is currently no program associated with it. 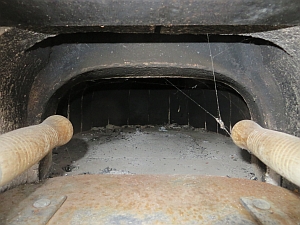 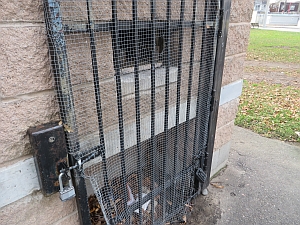 On a visit to this park in November 2015, this oven looked abandoned. The former wood storage area is full of leaves and trash, no wood. There are holes in the screen and the oven door is face down. This was the first prefab oven built by the city. Prefabs are now the official city "standard." 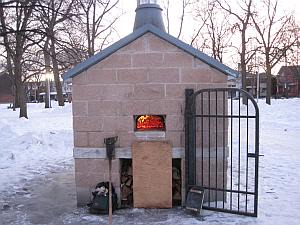 The oven stands between the playground and the pleasure skating rink at Alexandra Park. During the warm season, a cooking program at Scadding Court Community Centre uses it to bake pizza, bread, and muffins, and to roast or even dry vegetables. The program goes all year around, but Krista, who runs the program, doesnt have enough hands for oven operation during the winter. We decided to take it for our oven tryout project.

Baking with an outdoor oven is indeed a bit of work. In the wintertime, it feels like a little more. Our first action with this oven was to cut off the lock that was frozen solid. I had anticipated long hours of preheating because of the cold and the very small mouth of the oven, but with the help of wind, the fire went well. 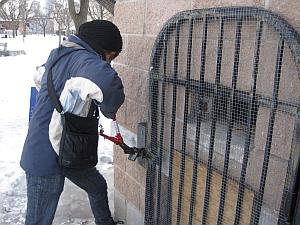 I must have looked strange in the rink change room though, sitting around with a rake (used to stir the fire) instead of a hockey stick. I was just about to close up after 3-4 hours of fire, when a passerby threw some more logs in the oven. Much as it ruined my lock-up plan, it is also a part of using an oven in public space. Its hard to predict how an unfamiliar oven would behave or what odd (or natural) things people might do when they see a fire.

The next day, Krista and I met at the centre at 9:30. The fire was lit at 10, and we each made dough. Kristas was Healthy White Bread with wheat bran and lots of seeds, which was served at the café and other programs at the centre, and mine was Potato-Onion Buns that we make for Dufferin market. 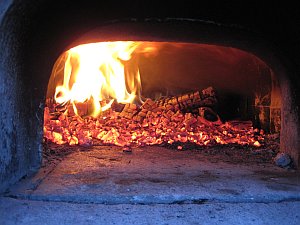 At 12:30, the program participants arrived and eight of us, including staff and volunteers, had a little opening chat with tea and muffin. Todays participants were all male, came from diverse cultures and age groups to make beef brisket stew and some bread. While we each started our tasks of chopping vegetables and forming bread, the oven was already hot. It had only been 2.5 hours! Sure, its a small oven (the baking chamber is very small for the size of the structure), but the size doesnt necessarily reflect the time it takes to heat it up. This one heated up surprisingly fast.

Conclusion firstthe bread got burned. As a baking day, it was horrible. While the oven was very hot, the potato-onion dough was rising fast. 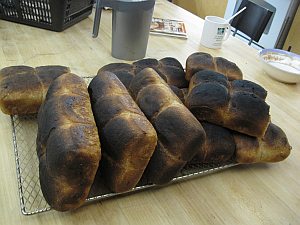 I was afraid that it might deflate, but I should have waited at least for a while. And I burned the Healthy White Bread, too. I felt inadequate, but the day was fun. While I was running back and forth between the oven and kitchen (with help from participants), the stew was magically made. We had it with crispy smoky buns, and we talked about food from different cultures.

The oven here is not too far from the kitchen, but it is far enough and invisible enough that it adds much more work to running the program. Krista and her colleagues are enthusiastic about the oven. They could always use a volunteer baker, if anyone is interested! 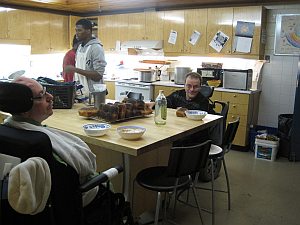 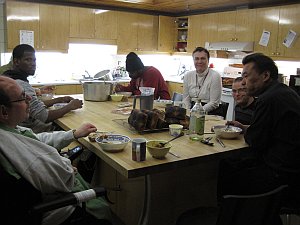 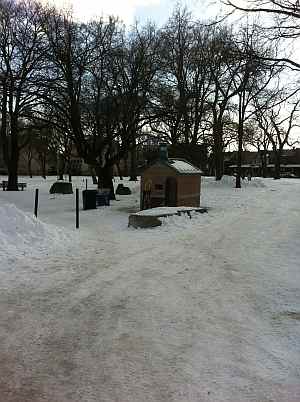 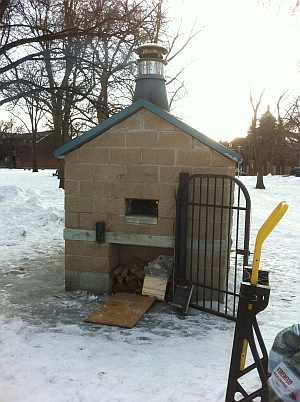 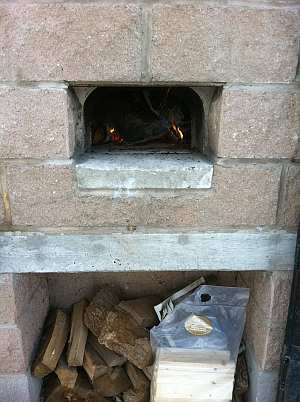 The oven has a small door 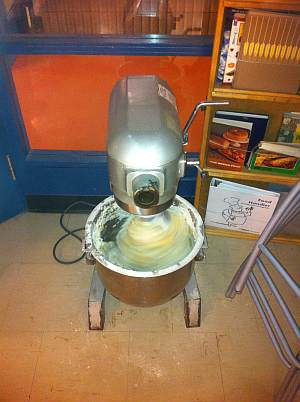 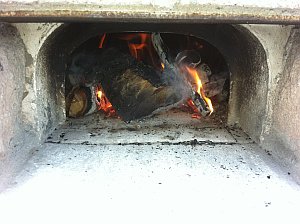 The fire near the front of the oven 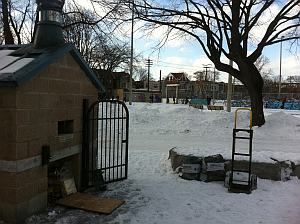 The oven is close to Alexandra rink 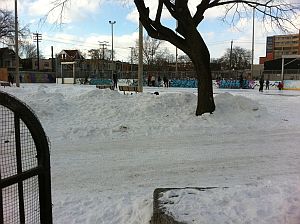 The pleasure skating rink had some skaters 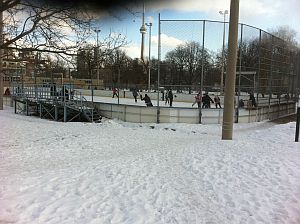 We did two rounds of baking after just a few hours of fire started in a cold oven. We were surprised since we thought the oven couldn't hold its heat at all. How nice to be wrong! 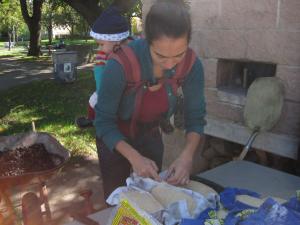 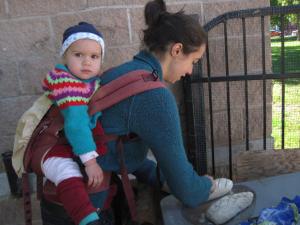 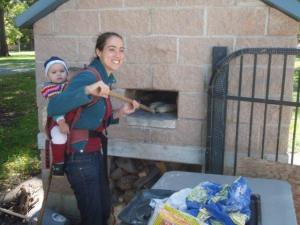 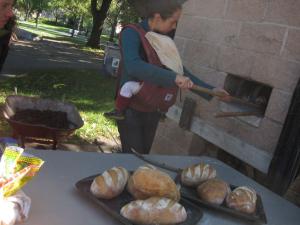 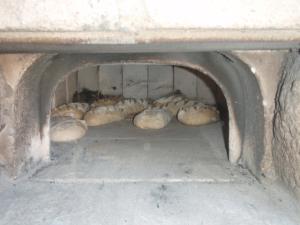 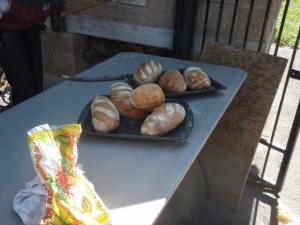 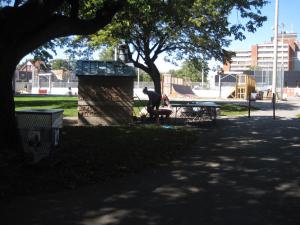 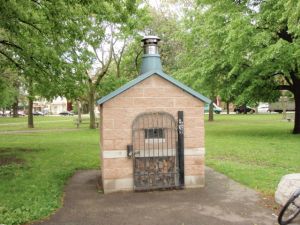 Harry Gairey official opening celebration today, 11am to 2pm. Bright sunshine but cold. Hockey in the neighbourhood program on the shinny side. The pleasure skating side was decorated with red, white, and blue bunting that's still available from John Innis Rec Centre. The wood oven was on and staff were making mini-pizzas. There was a sound system with music and there was also a large lion walking around. Councillor Adam Vaughan was playing hockey with his kid, and he stopped to hug the lion, but then he had to carry on to the next festival -- for Chinese New Year. 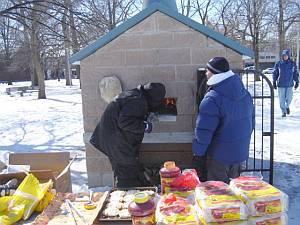 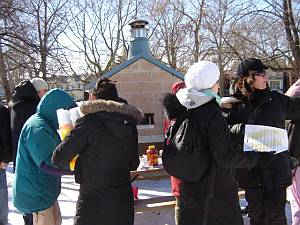