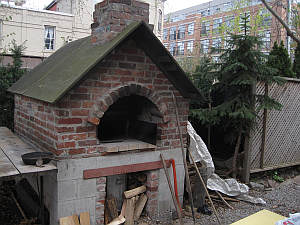 How come you are not baking with our oven? is what Gene Threndyle said when he heard about our project. So here we are at Artscape Artist Coop's garden.

Gene built this oven in 2005, and holds about 6 pizza parties every summer.

The oven fits in pleasantly with the garden that surrounds it, where daffodils and tulips are blooming out of stone edge beds.

There is a big dinner table underneath grape vines next to the barbecue place that Gene also built; a couple of tables by the oven make counter space to prepare food or to hang around the pizza fire...it's a very cozy space for outdoor gatherings. 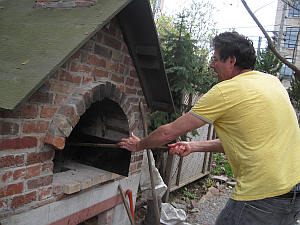 Gene had started a fire at 9:30, and it was burned all white by the time I got there at 2. Sadly, it showered on and off throughout the afternoon.

We didn't like that, but what can you do? Gene cleaned the oven and we started prepping pizza toppings while waiting for the oven to cool down a little.

As far as bread is concerned, it was a good day. From the day before when I mixed the doughs, I could afford to dedicate my time and care to the bread because I didn't have much else to do.

Flexibility and mild spring temperatures made it possible for the dough to develop fully for both the first and the second rising. 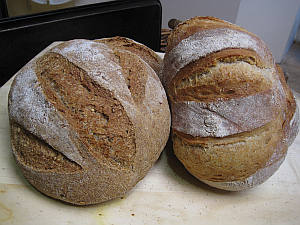 The sourdoughs turned out well.

The bread I made today was:

I like how they looked, and they tasted good too. The pure rye loaf sweetened with honey was almost like a dense cake.

Gene made a big pot of slow-cooked chickpea soup with lemon and olive oil. Onions, potatoes, green garlic and dandelion greens for pizza were cooked on the barbecue place.

The sky was getting lighter and by the time people came it had cleared up. 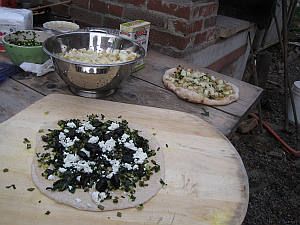 We enjoyed Gene's soup with fresh bread. Earlier showers kept some people from coming out and there was way too much food, but we decided to make a few pizzas.

Different saltiness from the cheese and olives, different flavours of garlic, sourness from cheese, and bitter kick of dandelion all nicely mixed in my mouth. I wanted to chew more to taste it well, but I also had to talk. It's difficult to fully experience the food and socialize at the same time.

A friend of Gene's had made clafouti and it was about to go in when I left. 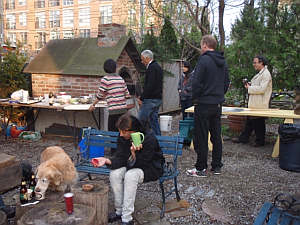 People arrived as the sky cleared.

I hear that there is one tenant who is very unhappy about the oven for whatever reasons, but she didn't come out today and I got no story from her.

Other than that, this oven seems to be loved. One of the residents of the building told me how beautiful the oven looked in the snow.

The oven is in people's living space, which is a bit different than other ovens. Even though it doesn't get used that much, the oven greets the residents every morning, rain, shine or snow.

This was its first working day of the season, and I'm sure it hopes to work lots more over the summer. 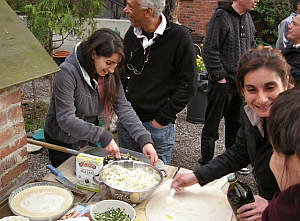 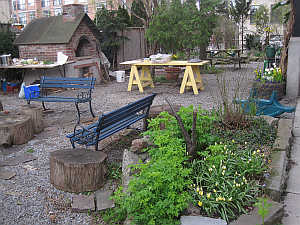 The oven and garden. 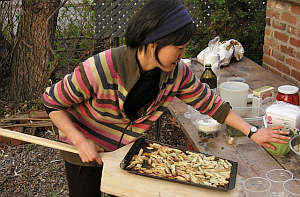 Yo preparing some veggies. 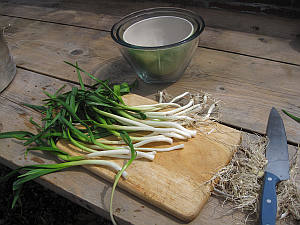 Green garlic for the pizzas. 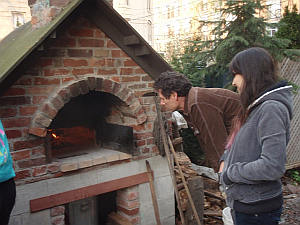 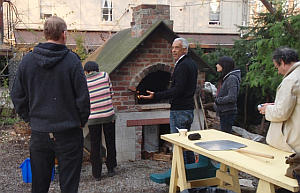 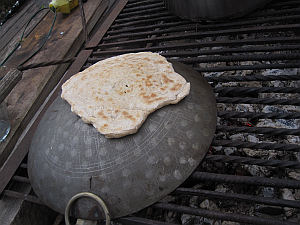 Cooking dough over the grill.