You are on the [cover page] of folder [Guest Baker Project]

In 2011 there were eight or nine outdoor bake ovens in Toronto, only a few of which were used regularly throughout the year. The goal of the guest baker project was to learn what assets and challenges each oven has. Each story comes from a baker visiting and baking in the oven, often at a community event where the bread was then served. The process of arranging an occasion and actually baking unfolded according to the characteristics of the oven, logistics of baking, and politics that surrounded it. We hope that our findings help the future use of ovens as well as the building of any new ones. We created a chart from the guest baker project here: Bake Oven Chart 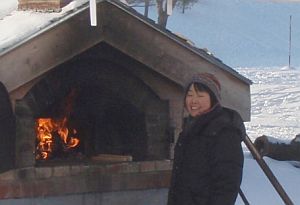 Since the first day of my visit to Dufferin Grove Park, I have been in love with the ovens in the park. Ovens are not exactly a part of the Japanese culture I come from, but I have always aspired for one, a wood-fired oven.

Here at the park, the bakers taught me by doing, and I learned by doing. That is the way we decided to do our research.

An outdoor oven is really a wonderful thing to have, and I hope that more people and communities benefit from building one. --Yo Utano 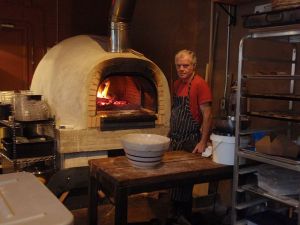 Jeff Connell in front of the Woodlot oven

The first guest gig was on Dec.4 at Riverdale Farm, for their annual "Home for the Holidays" event. Yo was the baking assistant to Jeff Connell, and there was a preparatory meeting at Jeff's new restaurant, The Woodlot. Then as Yo visited each oevn she wrote up the story. You can find out about Yo's experiences at the links at the top of this page.

Here is a youtube post that Yo Utano found, called Uzbec cuisine. Cooking with fire, in all its glory!