You are on the [PelhamParkJune2] page of folder [Guest Baker Project]

Report by guest baker Yo Utano 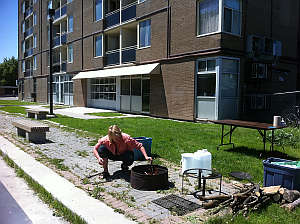 We got an opportunity to practice our new skill  roti on tawa  that we had just learned at Thorncliffe Park.

Arts4All, a community theatre group which has worked in the Davenport-Perth neighbourhood, planned a showcase event at Pelham Park.

When we asked if we could bring fire to cook food with, the artistic director Liz Rucker was excited but also warned us of possible strong reactions.

Pelham Park is a housing complex consisting of a high-rise apartment building and townhouses, located just east of the rail track, south of Davenport.

While it is home to many newcomers with children, it also receives frequent police visits due to drug dealings and gun violence. 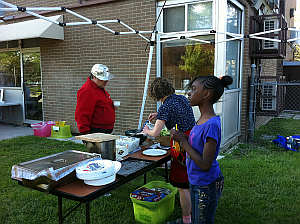 When we first visited here with Liz and Dan, her collaborating artist, we saw some kids' bicycles up on the trees, which added some bizarreness to the space surrounded by run-down looking townhouses.

Some tenants are sensitive to what others do, and quick to report to the head office.

Today's event is in front of the community room in the apartment building which Arts4All uses to run art programs. The window of the room opens up entirely (like a garage door), and it makes the space feel like a nice courtyard.

Arts4All activities in progress will all be shown today: a radio play, live performances, a parade and drumming, plus face painting and a cooking fire. 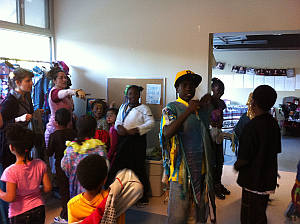 Everyone in the community is welcome, whether or not they have taken part in the production. The dinner menu is dhal and roti cooked over the fire, potato salad and green salad by another artist Jane Wells, and chocolate chip cookies for dessert. Mayssan, Ginger and I started the fire at 2, and put two pots of dhal on it.

Today, it's not just a demonstration, but we are making dinner for up to 70 people that will be eaten at 5:30. As soon as the dhal cooked, we started the roti production.

It was a sunny day but very windy. The fire had no trouble because it was in a cut barrel, but we had a hard time with everything from holding the tent to keeping dough from drying to keeping the food on the table. 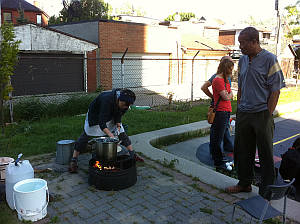 Jutta arrived and helped me roll out the dough while Ginger and Mayssan cooked them on the tawa. Sometimes the wind blew it off the tawa, but we managed to make about 50 by 4 o'clock when children came and discovered us.

But oh, kids are really a tough creature. They would pull and squeeze the same piece of dough until it can't get any wrinklier, switch to a new dough ball while leaving the deformed piece to dry, or put multiple dough balls together that were divided for a reason.

The next moment they play with a dog and then come back to help some more. In the midst of all this, the quality of the product seems unthinkable, but afterwards scenes with kids are often the most memorable. 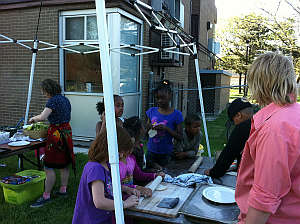 The other highlight for me was cooking bread on coals. After the fire slowed down and the tawa became too cold to cook, I got rid of the tawa and trivet, stretched a piece of dough by hand and cooked it directly on hot embers. It's really fun.

The dough twitches and poofs up on the direct high heat, and cooks within a minute or two. Sometimes it burns but most of the time it makes a fabulous bread, outside charred and inside moist.

While I was playing with this, all the bread we had made was served with the dhal folded in it, and we served these ember-baked breads as well.

After dinner, a short play, poetry reading and drumming performance happened in a very casual way. 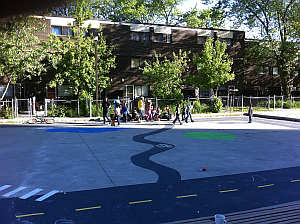 Drumming in the courtyard

People watched, talked, left, and came back. We watched the kids playing drum at a sunny corner of the courtyard, which was so beautiful that I forgave all of them for making funny bread. They were still running around tirelessly in their parade costumes when we packed up.

Fire has always been a magical thing for us human beings, but working with groups like Arts4All reminds us of its beauty once again.

As ordinary and natural as it is, the fire perfectly fits in with the festive mood and colourful costumes.

This is what I love about fire, and also food. They are ordinary but also very special. 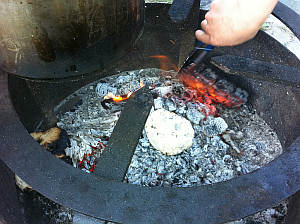 Bread cooking on the coals 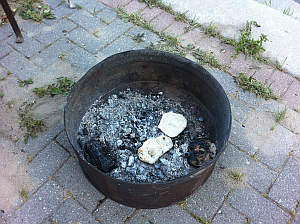 Bread cooking on the coals (2) 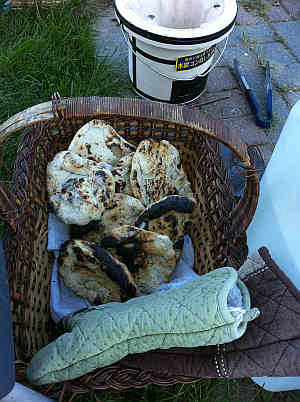 Bread cooked on the coals 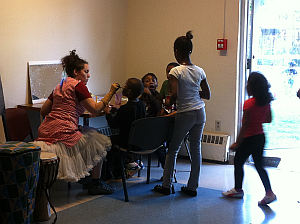 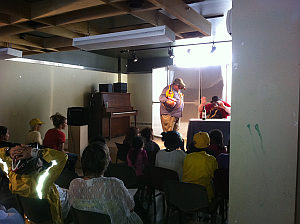