There's a nice video here that's part of an article on this oven in the online Harrowsmith magazine. 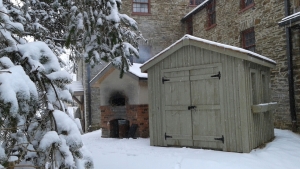 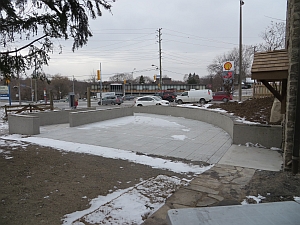 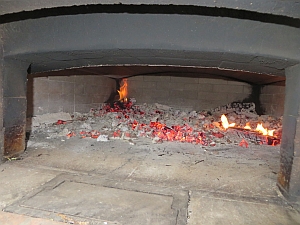 fire in the oven for market day 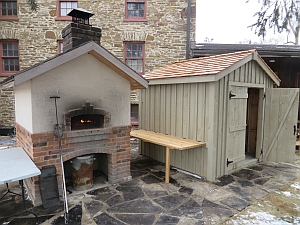 oven ready to bake, and new shed, with baking table at the side 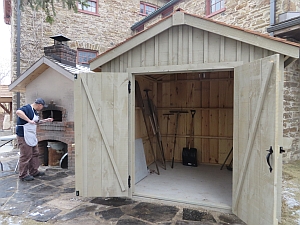 the inside of the capacious new shed

The news just got out that the city intends to use only small prefab ovens from now on -- because they use no wooden roofing and they have an engineer's stamp. The prefab ovens are also useless for community events and for baking bread for markets (too small, poor heat retention, and the hearth is poor quality). As an antidote to this strange news, we went to watch the Wednesday farmers' market baking at Montgomery Inn. Their oven is large and well-built, with a fine wooden shingle roof that fits in well with the historical architecture. It has no engineer's stamp and needed no building permit (the new rules are purely municipal -- not part of the building code). 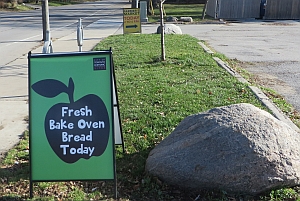 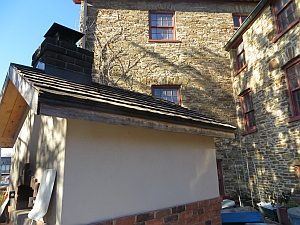 oven is nestled into the angle of the Inn, wooden shingles 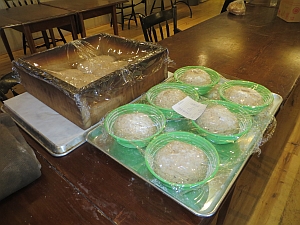 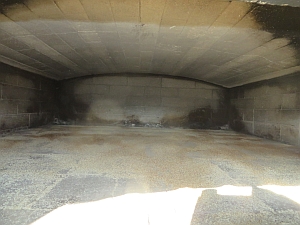 oven is hot, ready for baking 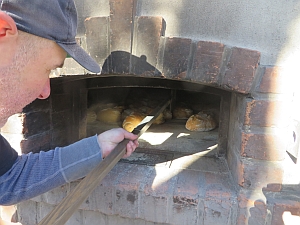 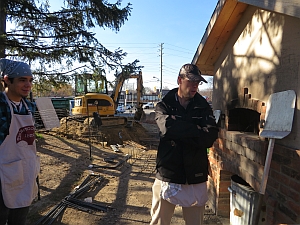 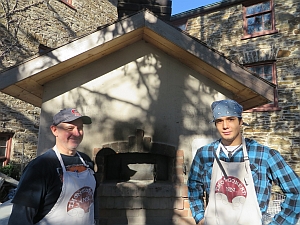 Montgomery's Inn has a large number of local volunteers who help with fundraising and improvements to the Inn. They call themselves "the innovators," and they got the oven built. They also buy the bread materials. They use the money raised from the baking for other projects at the Inn. One of the projects is a large youth program, and some of the youth in the program learn how to bake bread at the oven. The bread that the youth help to bake is then sold at the farmers' market. More money is raised and the volunteers get to take some of the bread they learned to bake home for dinner. A win-win. 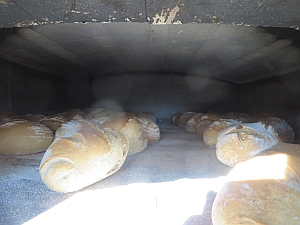 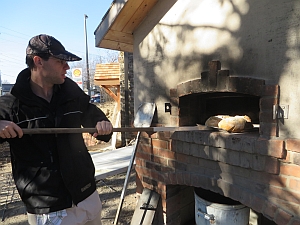 On market day, volunteer bakers bake bread to fund-raise. This historic Inn has a lot of volunteers (I think they told us there are almost 100). It happened that on this Wednesday. there were 5 men and one woman baking various things. An unusual volunteer mix! Some of the baking (cookies, apple crisp) was going on in the well-equipped industrial kitchen inside.

Outside, at 11.15 a.m., the oven was just finished its burn. It was built three years ago by Alex Chernov, who shows its construction on his website. The cost was around $20,000. We were told that the oven has even heat and holds it very well. It's higher than many other Toronto public bake ovens, i.e. with more insulation. The bakers tried out various baking tools and now have light-weight peels and oven rakes that are agile to use. A volunteer welder made these tools. 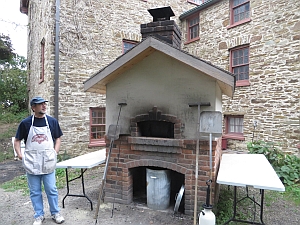 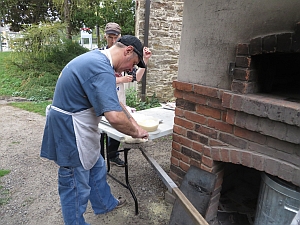 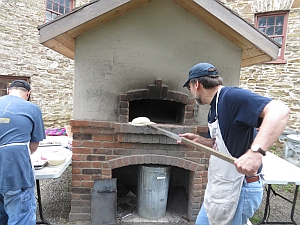 Dale putting in the loaves 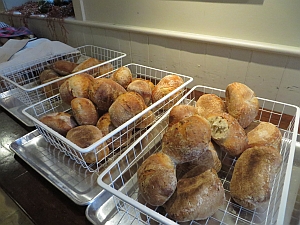 excellent bread ready for the market 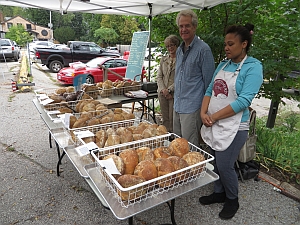 2 pm at the Wednesday farmers' market

We were told that the regular dough is made on Mondays and rises very slowly in plastic bins in the refrigerator. This method seems to give the dough a slightly more yeasty taste. The sourdough is made the day of the bake, and is milder than usual. Some of the bread is baked off on Tuesday and some on Wednesdays. The loaves we saw were all beautiful. The bakers say they like the weather cold, for better baking.

The bakers say they always make a light lunch during the Wednesday bake, to take a break and sit together. The mood around the baking was friendly and relaxed -- maybe that's one reason why the Inn has so many volunteers. And there is staff support as well.

The staff said that they tried to order their supplies through the City of Toronto but the process was so complicated that they now order their own supplies and the volunteer bank account pays for them directly. The volunteers handle the training of new bakers, as well as hosting curious oven tourists like us. And all of this is done in the peaceful setting of the old Inn, so graceful in its proportions and in its materials.

Here is also a blog about baking on the Inn's indoor hearth -- the Inn is rich in cooking fires.