You are on the [cover page] of folder [Oven Construction] 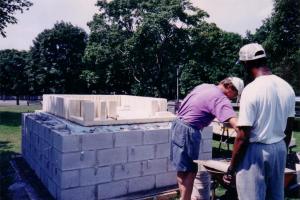 In 1995, the popularity of campfires for cooking in the park prompted the building of The Big Oven (construction summary)

In 2000, the Maytree Foundation said yes to a request for materials to build a second, smaller oven near the bigger one. Maytree also gave the funds to fly in Alan Scott, from California, to lead a ten-person workshop so that more people could learn how Scott's ovens are built: The Small Oven (more detailed photos)

In 2000, there were enough oven construction materials left to build another bread oven in Christie Pits Park. This was the first attempt to build an oven just from plans, without the involvement of a professional oven-builder. The plans came from the book The Bread Builders: Christie (medium detail)