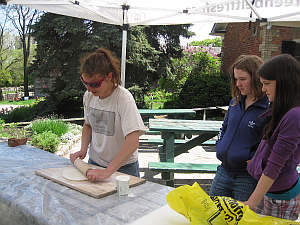 Rolling out the pizza dough

Contrary to last week, today was perfect weather for the market.

I got there before the market started and found Sarah, a volunteer baker, sitting on a picnic table by the oven with two young girls.

The fire was already at the back of the oven, ready for pizza.

Earlier, I had met a community development coordinator in St. Jamestown who worked with kids in the neighbourhood. She would often bring the kids to the Farm, but didn't know about the bake oven.

We talked about how great it would be if there was a pizza day program for the kids to have fun at. 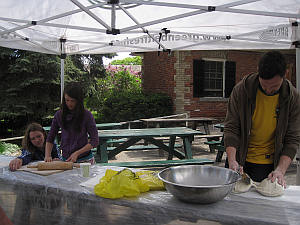 . From talking to the current head of Friends of Riverdale Farm though, it seemed like their hands were full with twice-a-week oven operation in which they made pizza for the Farm Kitchen cafe.

The Farm staff have had pizza days, and they could add them to their summer program.

The tent was up, the picnic tables got a plastic table cloth, and pizza making started.

Two young volunteers rolled out the dough, instructed by Sarah who said that it made great pizza if the dough rested a while after being rolled out, before it was dressed. 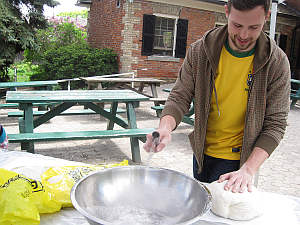 Next to them was a man interested in the oven, forming french bread dough he had made. They will be baked after the pizza, which made me happy just by the idea, even though I had to leave before that.

But he is going to start working as a Farm staff as early as next week, so won't be able to volunteer around the oven anymore. How sad. If pizza days became one of the Farm programs, he could possibly work with the oven.

I was curious about what they will decide about pizza days, but the Farm staff were busy with a meeting. Maybe next time I can ask.