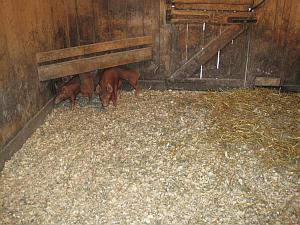 We got to the Farm just past 8 a.m. with Jeff Connells1 red fife sourdough and our cornmeal sourdough. We found little piglets in a barn and the farm staff who had been looking after them since 7 a.m. We got the key, the fire was lit, Simpson House (the building with washroom and kitchen facility) opened at 9 and I set up a workspace at a corner across from Friends of Riverdale Farm snack bar.

As the event opened at 10 a.m., people started coming to check out the gift shop filled with Christmas goods, to make Christmas ornaments in the front room, or to catch up with Elizabeth, a long-term friend of Riverdale Farm, by the oven. 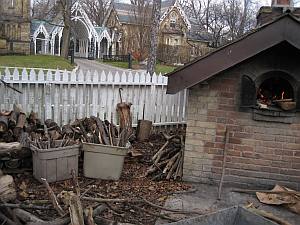 Baking is a slow activity, and even more so with a wood-fired oven in the winter. The oven took a lot longer to heat up than I had hoped, even though we fired it the day before to preheat.

Those who came by in the morning only saw the fire, some dough sitting on a table, and a baker sitting on a table (literally. There was no chair) who would occasionally go out to stir the fire. For the baker, it was a day of waiting and contemplating.

At Dufferin Park where we bake a lot of bread in two ovens, there is always a lot to do and time flies. Here, I just had to wait for the oven to get hot, wait for the dough to rise while trying to get the timing right. 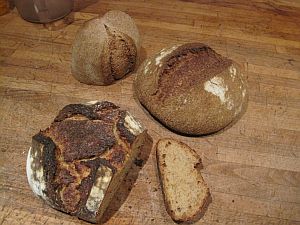 It would have been more exciting for people if we had made flat bread or pizza while the fire was on. Something to think about for next time. But I had an interesting time talking to the dough and learned that patience was key.

In the meantime, more exciting activities such as decorating gingerbread cookies or hand-dipping candles were led by the Farm staff at the Meeting House, a few steps from the oven and Simpson House. One of the staff in Santa costume was strolling around, handing out Christmas candies.

The outside temperature dropped in the afternoon and the day had grown greyer by the time the bread came out of the oven after 3 p.m. But it was fine, a basket full of golden loaves was bright enough.

Jeff Connell arrived after baking at his own bakery to see his bread come out of this oven once again. People sampled slices with Elizabeths homemade cranberry-goat cheese relish and the rest of the loaves were sold right away.

The oven seems to be in good condition, it is a good size, and has a kitchen very close to it. It would be nice if it got used more. It would be nice if the city was more supportive of the oven getting used, by understanding what it takes to bake bread and trusting those who love baking.

1Jeff Connell baked at St. Johns Bakery for a long time, sometimes using the Riverdale Farm oven. Now he has his own bakery. 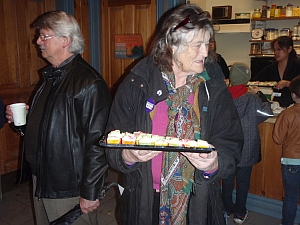 Elizabeth handing cupcakes around
hosted by WordAndData.com | powered by pmwiki-2.2.80
Content last modified on October 15, 2014, at 07:59 AM EST