Although the oven was built by community members, there is no agreement for them to use the oven. City permits does the bookings, through Nellie Raposo, 416 338-2614. 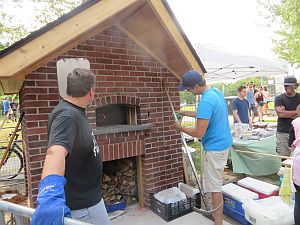 Joël Campbell says this day should be called trial by fire. The farmers' market was packed and the pizza oven had lineups. Joël said the city's permit came in at 3 pm on Friday -- a cliffhanger! It costs $15 a day, with no requirement for extra insurance since the West End Co-op's insurance covers it. The pizza looked very fine (organic sourdough crust, choice of toppings). There were lots of enthusiastic congratulations for the oven builders, that they actually made it happen. 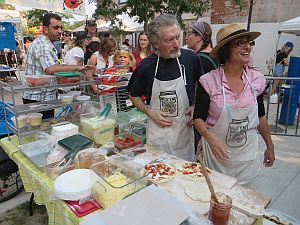 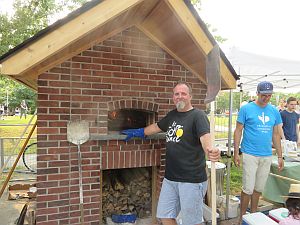 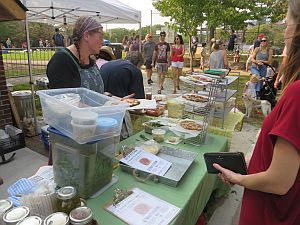 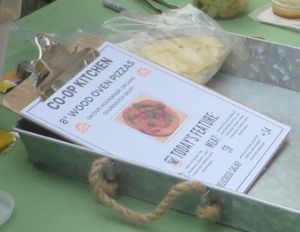 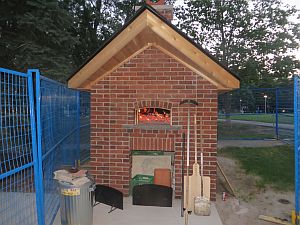 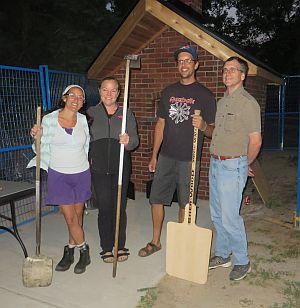 The people in the photo are Sonya Gammal from West End Food Co-op (who will be the lead user of the oven), Kathy Allan from the Friends of Sorauren Park, Joël Campbell from the Friends of Sorauren Park (who was the coordinator of the build -- he is also the owner of True North Construction) and Dale Howey from Montgomery's Inn (who is the lead baker at the Inn's outdoor oven).

Joël said that the oven cost about $14,000, not counting the cement pad (enlarged by the drinking fountain donours to allow space for the oven). The oven core was built by well-known oven builder Alex Chernov (his company is Stovemaster). The brickwork was done by skilled bricklayer Marek Bachorz. All the rest was by Joël and friends. A beautiful oven. 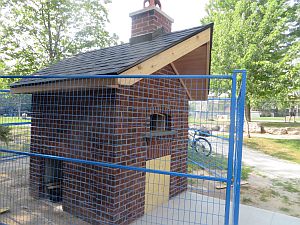 At the farmers' market, the fence is still up but the oven looks done and ready for baking.

From the Sorauren Park website: The bake oven was supported by donations from community members and built by volunteers from Friends of Sorauren Park, with the help of amazing, skilled craftspeople.....The final build is made possible thanks to a generous donation by Zinc Developments, builders of the 35 Wabash Avenue condo across the street from the park. Their donation purchases all the supplies to finish the oven.