You are on the [OvenDiary] page of folder [Dufferin Grove Park]

Most of the "diary" is here in our Cooking with Fire booklet. But there are some more recent entries too.

For two and a half years the oven was padlocked, along with most other ovens citywide. Dufferin Grove had a "ghost oven." Then in mid-September, there was a turnaround, and the smaller Dufferin Grove oven came back into community use. Read more

The covid shutdowns mean there's been no baking since the middle of March. The chimney has needed repairing for at least five years but the city made no response to requests. So it seems time to just do it. On Aug.5, Dale Howey (from Montgomery Inn and Regent Park ovens) came and counted bricks. He priced them and today came and chipped away the damaged bricks. He took one brick with him to match colours, and will come back to be the lead fixer next Thursday or Friday. 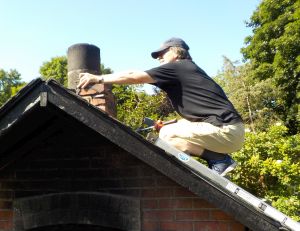 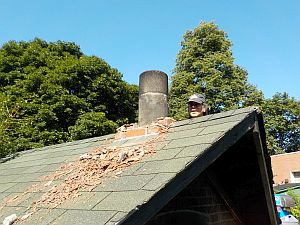 A catch-up: part of the area where the ovens are, and both of the kitchens used by bakers, will be under construction starting in spring. Meantime, there are only two staff who know how to bake bread in the ovens, and some others who know how to make pizza or bake/roast food for the suppers. They are all rec staff, but are mostly classified as "arts and crafts" staff.

On Thursday, the support staff for the bakers cancelled their shifts, so the rink's skate sharpening staff had to stop sharpening and take over the bread baking, otherwise all the dough (made by a different staff person) would have had to be thrown out. Baking at a hot oven is hard work and most of the rec workers choose not to take those shifts.

When the rink house is under construction and there are no kitchens, there's some idea that the bread dough might be prepared at the playground cob cafe, and then taken across the park for baking. Unrealistic. More likely the whole operation will be stopped.

how hot? (little oven, with part of hearth shelf missing)

They came because they want to learn to operate the recently acquired Fairmount bake oven, which was moved from Christie Pits by truck and crane and dropped in the east part of the park in front of Joseph Romain's house last November. The new Fairmount oven is actually the first Christie Pits oven, built by CELOS and rec staff in October 2000, with leftover materials from its twin, the smaller Dufferin Grove bake oven, built in May of 2000.

From Lottie: "A big thank you to Heidrun at Dufferin Grove for sharing her bake oven and bread baking expertise with Joseph and me yesterday. A day-long process that went by in a flash and was capped with a slice of heavenly potato and rosemary sourdough."

fire is getting going in the big oven

down to coals, raked forward before being taken out

Len Senator owns the one-of-a-kind The Depanneur. On the first Tuesday of the month he offers "Table Talk," a meal and a talk/conversation. This time, Shauna Kearns came up from Pittsburgh, where she's starting to work with bricklayers at the Trade Institute of Pittsburgh (TIP) to help people coming out of prison to build bake ovens for sale. Shauna said she first met the people at TIP when she wanted to build a bigger bake oven in Braddock PA, to replace a smaller oven that was crumbling. TIP shows the building of the foundation here. What happened next is sketched on the Braddock Community Oven website. Hearing Shauna's lively telling of the story at the Depanneur table talk fleshed out the story wonderfully. 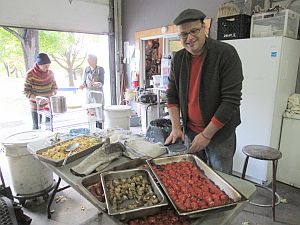 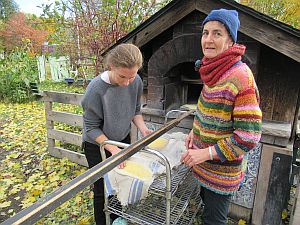 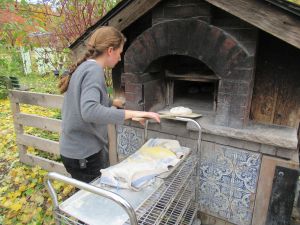 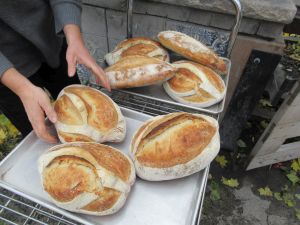 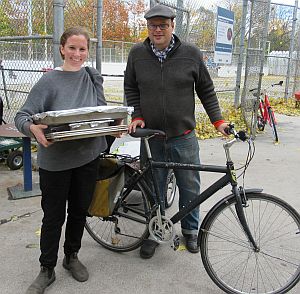