You are on the [Fairmount] page of folder [Public Bakeovens]

The pictorial building record of the first Christie oven, now the Fairmount oven, is here

This is how well an amateur-built Alan Scott over works after it's been detached from its concrete base at Christie Pits, lifted up and moved twice, and then transported clear across the city and lowered by crane into its new home at Fairmount Park:

The baker group got an email from and assistant to the city councillor Brad Bradford, saying that their office had asked the rec supervisor to get her staff to "come out and do a training, showing how to light the fire in that the Fairmount Park Oven."

But the bakers already know how to light the oven. It's practice that they need, and they had written to the councillor's office about needing a key for the Jan.21 baking date. No key, but a belated message....

The nine-person bakers' crew has scheduled a practice bake day today with Dale Howey (Montgomery oven) and Jutta Mason (Dufferin Grove ovens), but nobody let the Fairmount bakers have a key for their oven, so the practice had to be cancelled. Parks manager Peter White wrote to them saying for sure a key would be available for the postponed practice day (Feb.4).

From Lottie: "A big thank you to Heidrun at Dufferin Grove for sharing her bake oven and bread baking expertise with Joseph and me yesterday. A day-long process that went by in a flash and was capped with a slice of heavenly potato and rosemary sourdough." read more.

The oven crew -- Karen and Marietta -- lit the oven in the afternoon and by 6 the oven was full of fire. Karen said that they had tried to push the fire soon after they had it going, and it went out. But by 6 the creosote had mostly burned off and most of the oven bricks inside were white.

At about 6.15, six baker-women came out of the house across the street, bearing the eight pizzas they had got ready to bake, on their metal platters, and singing a song ("That's Amore"). What class! The fire was pushed back more and Michael Monastyrskyj (Dufferin Grove Park baker and also the photographer for this account) scraped some fresh snow onto the bakers' broom and swept out the ashes. 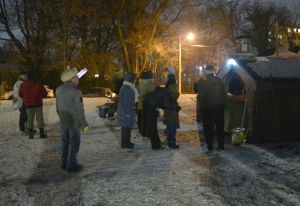 people come to look (and smell the pizza) 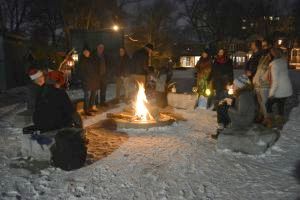 the solstice campfire, nearby 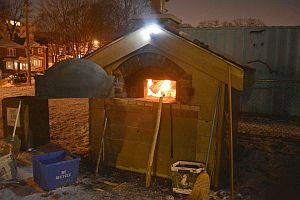 a good fire in the oven, started in the afternoon 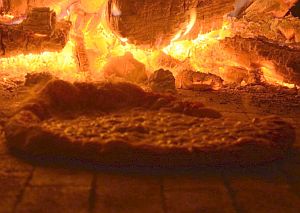 the first pizza (there were eight altogether)

The thick crust pizzas took some time to bake all the way through but they were delicious and the wedges never lasted longer that a minute when they were taken out of the oven. The fire keeper said that she was used to campfires, and it showed -- she kept the heat steady and none of the pizzas were burned despite the intense flames. 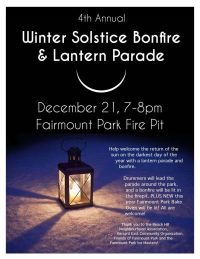 We will be firing up the Fairmount Bake Oven on Saturday the 21st at 3 p.m.
Making the pizzas at 5 p.m.
Hoping to bake the pizzas between 6 and 7 p.m.

4th annual Winter Solstice Bonfire and Lantern Parade
December 21, 7 -8 pm
Fairmount Park Fire Pit
Help welcome the return of the sun on the darkest day of the year with a lantern parade and bonfire.
Drummers will lead the parade around the park and a bonfire will be lit in the firepit.
PLUS NEW this year Farimount Park Bake Oven will be lit!
All are welcome!

"we had the bake oven unveiling along with our rinks season launch last Sunday- Councillor Bradford and his staff were there as well as MP Erskine Smith. We had about 100 neighbourhood folks turn out, speeches made and some pizzas baked and hot dogs grilled on the fire pit. Hot chocolate, coffee, hot apple cider etc."

We met with councillor Brad Bradfords office this morning. There was much focus on the most organic, neighbourhood spirit and efficient way to run the oven is based on the following statement that I made:

All or most parks generally like the idea of an annual blanket bake oven permit with all event scheduling and individual event access (ie lock and unlock) and safe use controlled by Friends Of.

Friends Of to notify Parks in advance of any intended use and the name of the qualified operator.

This is essentially the process we use for building and operating the Fairmount Park ice rinks - in a word, self-managed.

Their office seems to accept this is an ideal approach and will priority review it with parks and other involved city groups for buy in. We told them we want to conclude a general agreement on process by Nov1st so we can get on with planning for oven related events already getting organized.

The oven was brought over from Christie Pits by the Parks Department. From Barry Ross:

I was able to convince staff that the oven and/or oven and enclosure could be moved by looking at the design drawings and getting advice from folks like you and Jutta and the original builder.

Unfortunately the city technical team assessed the oven and determined there is no way to move it safely across town to Fairmount and likely it would crumble thru the trip as the masonry of the oven and enclosure and foundation are all integrated.

From Barry: The city is reviewing our application and is gradually ticking off ok boxes.

They are now at the funding/fundraising part.

They will first be investigating the cost to relocate your older oven to our park, so I expect they will contact you about past experience and players involved in prior movesI volunteered to put that info together myself but they insisted on leading that.

So expect they will be in touch with someone from the Christi Pits end soon.

when we built the first oven, I heard from Alan Scott (whose plans we and a lot of other people used) that the ovens are moveable. We never thought of it again until we heard that the oven we built at Christie had been more or less dumped a distance away. I guess Parks thought that it was redundant. Since the funds we used in 2000 were donated by the Maytree Foundation, we didn't want the oven taken out of the city, and Maytree were not pleased to hear about it either.

It's great that it's going to Fairmount, Barry, and I imagine any contractor who works with heavy stuff -- like the contractor that move the oven within Christie Pits -- would know how to handle the transport. Certainly Parks supervisor Brian Green would know about the issue as well.

I saw them move the oven -- it's on a concrete base so they used heavy machinery to pick it up and move it out of the way and then into its current location. My understanding is that it could be loaded onto a flatbed.

CELOS has a website about all 18 of the city's public bake ovens, with separate sections for each. The Christie ovens log (older and new) is here. It's kind of annoying to read since you have to read from the bottom up, but it tells a lot, starting from when this first Christie oven was built (scroll right to the bottom).

If you scroll to the Nov.1 2015 entry, you can see that the oven was picked up and moved some distance away (then picked up again later to be moved back), apparently without incident or damage.

The original Christie oven was not used all that much, as you can see from the log, since the rec supervisor didn't approve of fire. But its twin at Dufferin Grove has been used more than a thousand times since it was built. After 15 years of so much use, possibly also with bad habits of too much slopping of water during mop-out, the hearth surface started to crumble a bit. But putting in a new one was dead easy, as you can see in the Sept 2015 entry here. So this oven you're getting should not cause you too many maintenance troubles.