You are on the [OvenLabGatheringMaterials] page of folder [Temporary Ovens] 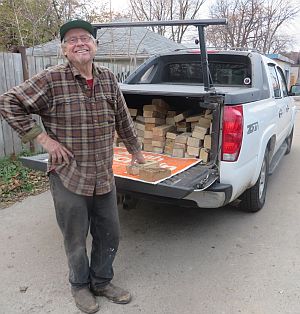 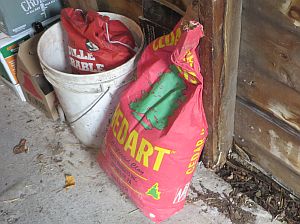 Alan came by with a truckload of firebricks from behind the factory. So now we have all the bricks we need. Plus I found the unused sack of clay powder left over from our hearth fixing bee with Jonathan White at Dufferin Grove last year.

about half the bricks we have already, plus more coming from Alan 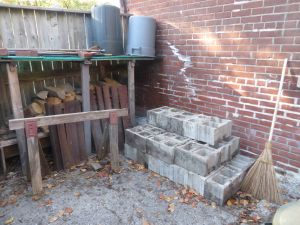 the blocks for underneath, angle iron at the left 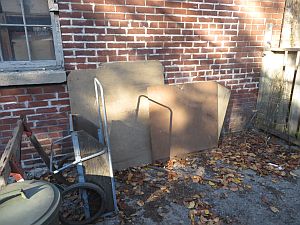 scavenged plywood for under the hearth 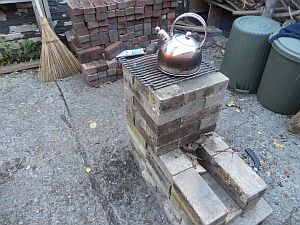 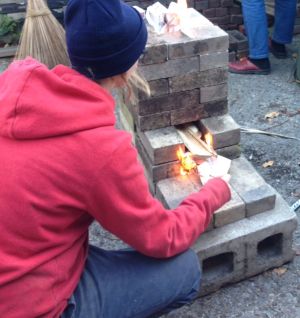 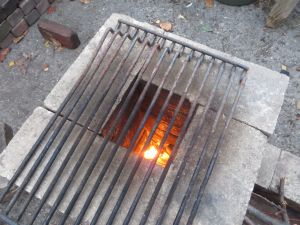 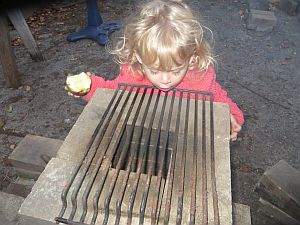 ...but was hard to keep going, even with Hana Mia's blowing

A letter of good counsel from Kiko Denzer

As for ovens, yes, I think 3 steps up is probably good -- esp. if the fireman says it burns better that way. I would try to stick to the 63% rule (door to interior dome height) -- and try to keep the highest point of the dome to about 16" (6 - 8 courses of brick, depending on thickness). Clay mortar is also good, and was/is often used for permanent installations (I just finished building my code-approved heater w/clay-sand mortar, and (as I think you know) many clay- or clay-sand ovens have been approved for commercial use). Indeed, you could use old bricks and clay mortar to build an oven even more beautiful than that outrageous $161k oven. Here's an MHA oven built w/clay mortar that you could improvise w/your supplies. The Forno Bravo style round oven can be built with half bricks and clay-sand mortar. There's lots of videos out there. And of course there's mud -- a bit cold in the winter. As you know, price and culture are often mutually exclusive.

I'm sure you've trolled around on the web for other campfire/cooking stuff, but here's one I just watched and like a lot: a single log that can serve as a stove and a (small) campfire, good for many hours of use. And of course there are all kinds of simple rocket stove designs -- similar to the ones you've got, some simpler, some more complex.