You are on the [AlanCarlisle] page of folder [Temporary Ovens] 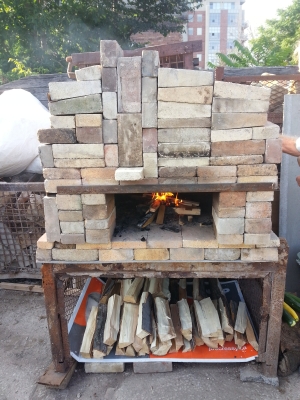 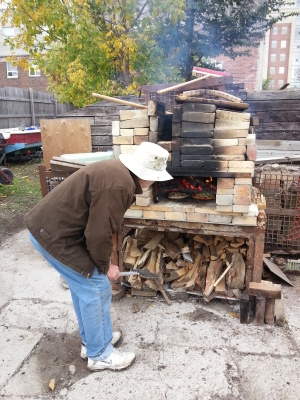 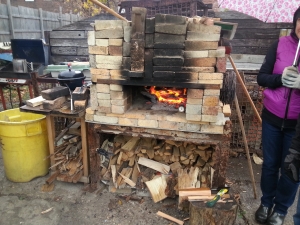 From oven builder Alan Carlisle: "Fired it up a few times works like a charm..." 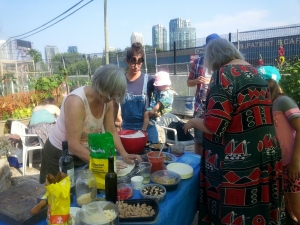 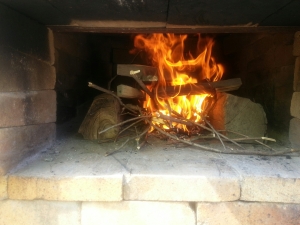 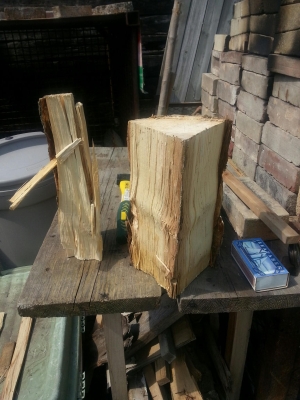 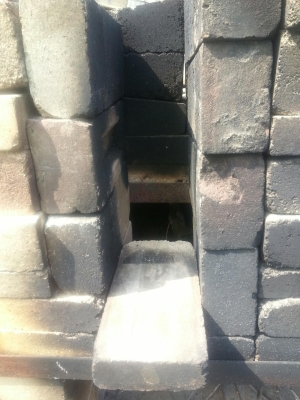 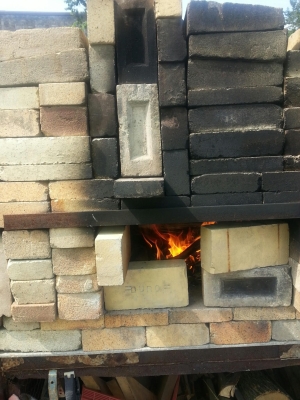 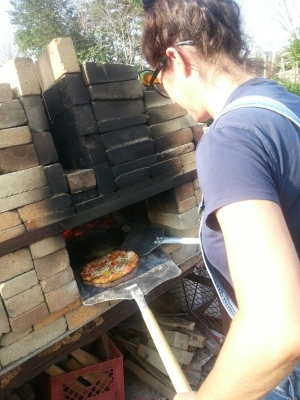 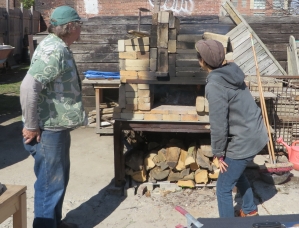 Alan shows Yo that this is an old industrial site

Yo Utano, who carried out the CELOS guest baker project in 2010 and 2011, moved back to her home in Japan three years ago. In order to do a follow-up on public ovens in Toronto, CELOS was able to bring Yo back for three weeks in October.

Alan Carlisle, who built the temporary oven in this community garden, is a very busy contractor. But he moved his schedule around so he could take the time for us to come and make some pizza with him.

The bricks for the oven came from an industrial site that had a lot of foundry bricks left over. Everything has been re-purposed in a most ingenious way. The pizzas baked up in minutes and were every bit as good as those we bake in Dufferin Grove Park's permanent oven. 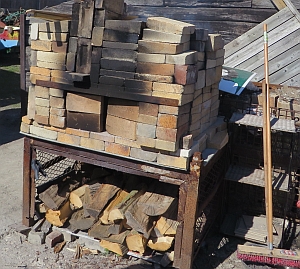 they use a broom to clean out ashes

A rocket stove was there too, built in the same way by stacking old bricks. Alan says the stove works just as it should. 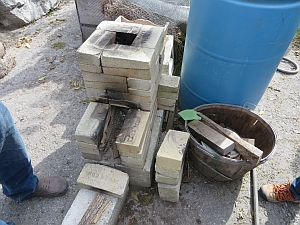 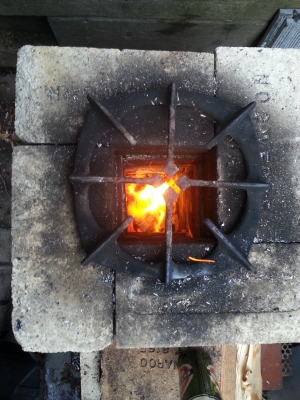 fire in the rocket stove

Alan says that the oven has been used maybe 5 times. Baking with fire takes so much longer than turning on an oven. The food may taste better, or -- if experience is still being built up -- it may be burnt. Lacking a kitchen, every baking is like taking a picnic, with all the possibilities of heavy hauling or forgetting something. But oh -- the enjoyment of simplicity, unmediated by a gas or electrical infrastucture! And when ingenuity, balance, and natural materials are so evident all around, as at this oven, the oven is a totally satisfying work of art. And food. 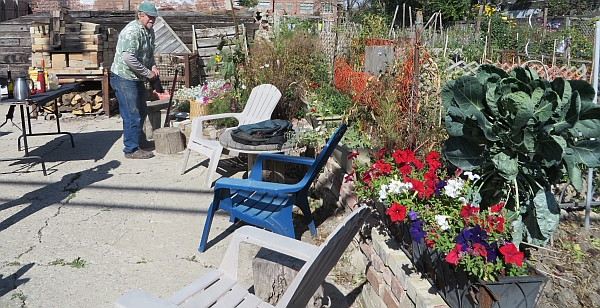 The oven has been dismantled and rebuilt a slightly different way. 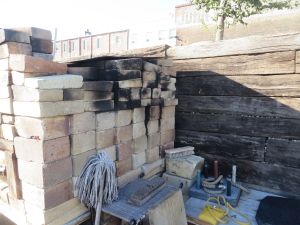 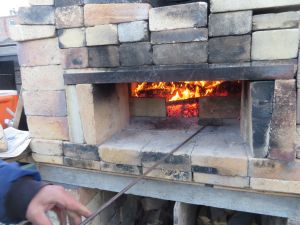 they put some bricks in front of the fire 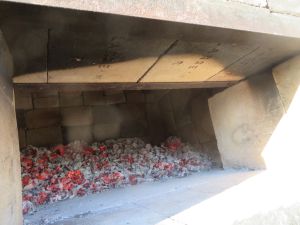 the oven vaults upwards beyond the entry 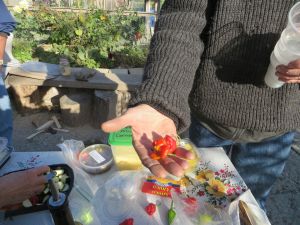 peppers from the garden

the view is a study in contrasts 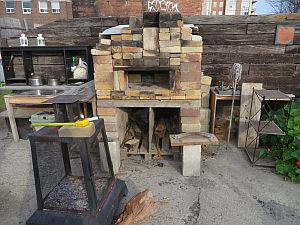 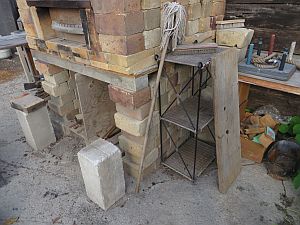 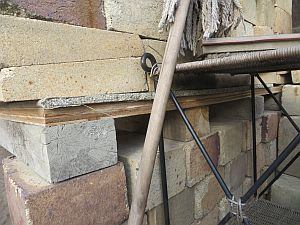 oven floor: two layers of plywood plus cement board 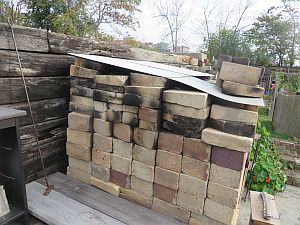 left side of oven above hearth 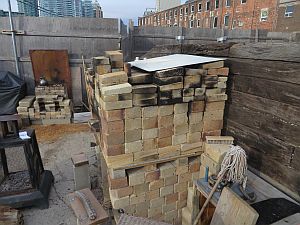 right side of oven 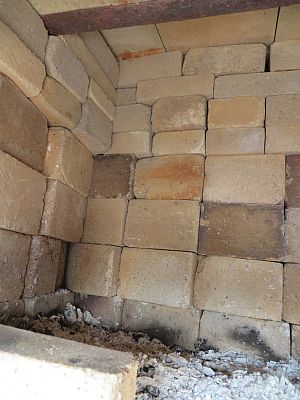 rise of back wall 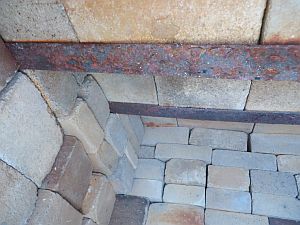 three step-ups from front to back 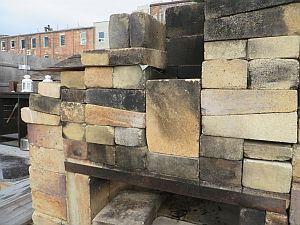 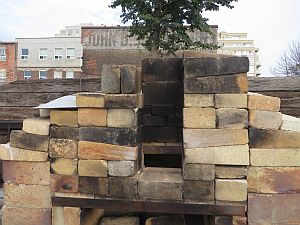 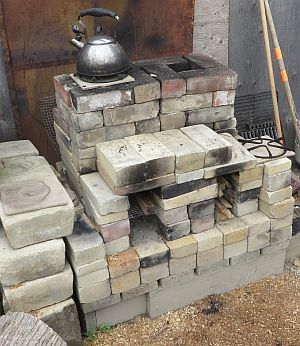