You are on the home page of www.publicbakeovens.ca

You are on the [cover page] of folder [Public Bakeovens]

Why bake ovens? Over the years, CELOS has found that these small brick or cob structures bring forth delicious pizzas, bread, and new friendships. They are also a magnet for stories of distant places, for community gatherings, and -- more recently -- for regulations. The following sections present the stories, photos, journal entries, newspaper articles, policies, and other documents that CELOS has collected about bake ovens. 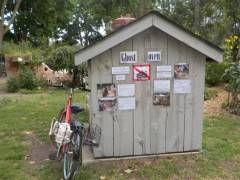 In 1995, Dufferin Grove got the first outdoor oven located in a Toronto park. Jutta Mason had that idea as the result of watching this little film at the Toronto Reference Library in 1994. The film was made in 1983 and it's mostly about trains and port wine in the Douro region of Portugal. Near the end (at 35.10 minutes) there is an eyeblink scene about a communal bake oven in a small northern village, revived at the urging of a radical priest. Dufferin Grove Park is in a neighbourhood that has a lot of Portuguese immigrants. An outdoor, communal bake oven seemed like a good thing to try here....read more 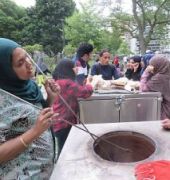 It is an open air cooking device traditionally used in many cultures ranging from the Middle East to Central and South Asia. In a tall clay pot with a fire at the bottom, insulated to keep the heat in, various foods such as bread, grilled/roasted meat and vegetables are made. read more

In 2011 there were eight or nine outdoor bake ovens in Toronto, only a few of which were used regularly throughout the year. The goal of the guest baker project was to learn what assets and challenges each oven has. Each story comes from a baker visiting and baking in the oven, often at a community event where the bread was then served. The process of arranging an occasion and actually baking unfolded according to the characteristics of the oven, logistics of baking, and politics that surrounded it. We hope that our findings help the future use of ovens as well as the building of any new ones. We created a chart from the guest baker project here: Bake Oven Chart 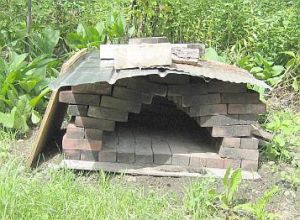 Bread and Puppet oven from the front

Our original inspiration for temporary ovens was the work of Bread and Puppet Theatre, who have been doing what they call "cheap art" in New York, Vermont, and many other countries since the 1960's. Their performances always involve puppets and bread, and when they are not at their farm with their own ovens, they build ovens with whatever materials come to hand. read more