You are on the [CuringThePortableTandoor] page of folder [Dufferin Grove Park] 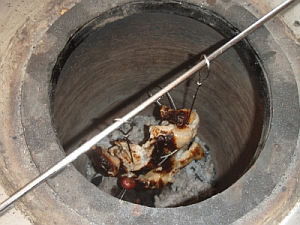 On Monday evening I made the marinade for the Tandoori chicken. I mixed the yogurt with freshly made garam masala, onions, garlic, ginger and chilies. I put the mixture through a strainer and immersed two chickens in the marinate over night.

On Tuesday I came in later than I expected, deterred by the downpour from riding my bicycle to Dufferin. I set up the tent outside the garage to fire the tandoor. I lit a fire in the dutch oven around 11:40 am and waited for the coals to get hot.

I loved sitting in front of a fire on such a rainy day. The coals went into the tandoor at 12:35. I moved the coals around in the tandoor to make sure that all sides were getting heated evenly, creating air paths the way Heidrun taught me a week before.

I also played around with the amount of air that was let in by the door on the bottom and the lid on the top. I added more coals at 1:15 to keep the high temperature in the oven. I skewered the whole chicken and placed it into the tandoor at 1:30.

Ginger butchered the second chicken and I cooked pieces of chicken in the tandoor instead of the whole bird.

Ginger suggested basting the chicken in the marinade throughout the cooking process to keep the chicken from drying out and burning. 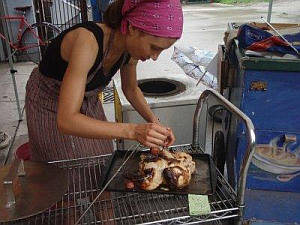 The chicken also might require a slightly lower temperature and a longer cooking process than what I anticipated.

I continued with my experimentation by placing a head of cauliflower and a few heads of garlic wrapped in aluminum foil onto the coals. The first head of garlic burned after 20 minutes. I decided to place a second head of garlic for 10 minutes and it turned out quite nicely. The garlic would go great with freshly baked naan bread.

I really enjoy working with the tandoor. I am still trying to develop my skills when it comes to distributing heat evenly and determining cooking times for different foods. I feel the tandoor would work better with smaller sized items that would be cooked quickly without burning on the outside. 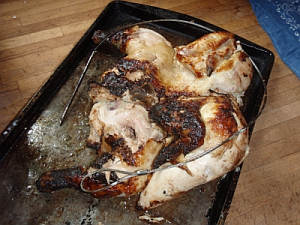 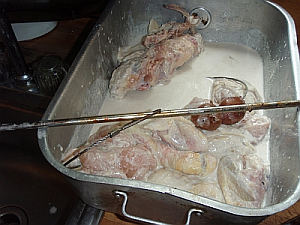 The tandoor spent several years at Thorncliffe Park's R.V.Burgess Park, until the park got its own tandoor. Then CELOS brought the tandoor back to Dufferin Grove and continued lending it out from there.