You are on the [History] page of folder [Dufferin Grove Park]

How Bake Ovens got built

How the First Oven was Built: Photo Gallery >>

You can see a step-by-step photo gallery of how the oven was built, and get some tips: Read more >>

When we first put out feelers in 1995 to see if anything would stop us from building a communal wood-fired oven, we found to our amazement that there was nothing to stop us. The building inspector said the oven was too small to come under his jurisdiction. (He also looked at the oven plan diagrams and told us he had once been a bricklayer, and that he thought, personally, that our plans looked good.)

The park supervisor said he didn't see anything wrong with our oven plans, and then he went away on holidays. The fire department said they had no problem with an enclosed fire set some distance away from any other building. A government agency that had given us a small "child nutrition grant" said that fresh bread from an oven sounded nutritious to them, so we could use some of the grant to pay for the oven materials. A friendly and capable contractor in the neighbourhood looked at our plans and said, sure, he was busy in the week but he could get our oven built in a couple of weekends. So with nothing to stop the oven, we went ahead and built it. Our experiences are written down in our booklet called Cooking with Fire in Public Parks. You can also see a step-by-step photo gallery of how the oven was built, and get some tips: Read more >>

The plans came from Alan Scott  oven designer and builder, visiting leader of our second oven workshop, desem sourdough baker. Alan's web site is www.ovencrafters.net. We have heard that the business is now operated by Alan's son, since Alan died some years ago. You might read The Bread Builders by Daniel Wing and Alan Scott (Chelsea Green, 1999)  a "thoughtful, entertaining, and authoritative book that shows you how to bake superb healthful bread and build your own masonry oven".

Links: the brick oven page at the Masonry Heater Association's web site is full of interest.

A wonderful how-to book by Kiko Denzer, called ''How to build your own earth oven." Kiko has been a pen-pal friend of the Dufferin Grove oven almost since the beginning.

The Saint Paul Bread Club has done a lot of sleuthing about where outdoor wood-fired bread ovens might be located in the U.S.

The two wood ovens are near the basketball courts and the outdoor ice rink, at the northwest corner of the park. They're next to some flower and vegetable gardens that are surrounded by split-rail fences to keep the dogs out. Roses grow over the fence, and beans and squash in season. Sometimes in winter if it's really cold out, skaters come off the ice to stand by the oven nearest the rink, to try and warm themselves. But the ovens are not very warming, because they were designed to channel all their heat into their baking chamber.

How we use the ovens

We used to use the ovens a lot for festivals and community events. Now it's shifted mostly in the direction of regular park programs like public pizza days in warm weather, city staff baking bread for the Thursday farmers' market, and city staff cooking for the Friday Night Suppers (mainly June to September when the suppers are outdoors).

Here is an excerpt from the early days of the ovens (around 2002): An oven attracts festivals and community events. This only makes sense. People want to share food on special occasions. If we had built substantial stone barbecues instead of an oven, the festivals would still have come. But an oven is more sheltered from the elements, and in winter we can bake bread and make pizza even when it snows.

We don't have to put on the festivals ourselves. People call up and say: 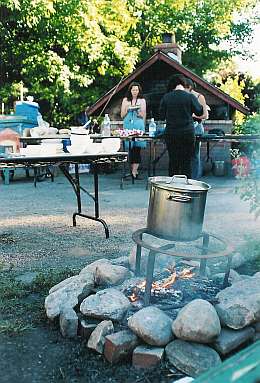 Dinner around the oven

....six folk-dancing groups get together once a year and there are too many people for a small hall -- could they come and dance outdoors and bring a potluck to augment our bread and pizza?

....A theater company has devised an open-air park performance about the mythology surrounding baking in ancient times, could they get us to bake some bread for opening night?

.....A community Hallowe'en parade needs a destination for the parade to end at -- could they end at the park around a giant bonfire, with fresh bread for the participants?

.....The local city councillor's office wants to host an all-neighbourhood lawn sale, could they put it near the oven and have some pizza available?

The smaller events come even more easily. A nursery school wants to do its annual fundraiser, a daycare wants a picnic of all the parents and kids, a street festival will culminate in a pizza-potluck at the park, a group of friends wants to bake unleavened bread before passover, a city parks tour wants to stop and have lunch at the oven. Even birthday parties, if screened, are a kind of community get-together, with familiar faces as friends from school and, often, their parents, gather around the pizza-making table.

And that's not even counting the school classes which want to make pizza at the park, as part of their play day, or part of a lesson on wheat. There used to be weeks in the spring when there were school outings to the Dufferin Park oven twice a day every weekday. (We finally put a halt to having so many: we were turning into a pizza joint, when we're actually a park.) Some of the children who came to those early school visits told us they'd never been to the park before, even if they lived three blocks away. So the oven brought them into the park. They often said they'd come back with their parents, and sometimes they did. 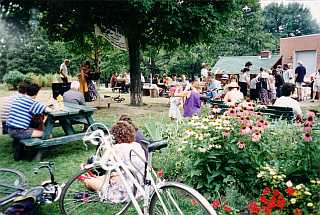 The programs we do offer ourselves around the oven are also proof of the strong desire people have to eat together. Three times a week in the summer it's an open oven, when anyone can come and buy a lump of dough and some tomato sauce and cheese, bring their own toppings and make a pizza lunch. Often there are seventy or eighty parents and young children coming to make their lunch. Getting your lunch like this takes much longer than ordering a slice from the pizza place up the street. But people tell us speed is not the point. Perhaps they've come to meet their former prenatal class here, all of them now with six-month-old babies, and they're all spread out on three big blankets. Or they've just arranged to meet one friend and spend an afternoon off work in the sunshine, talking and watching the children run around the park. Or they've come on their own, new in the neighbourhood, hoping to meet some of their neighbours.

Bread as a fundraiser 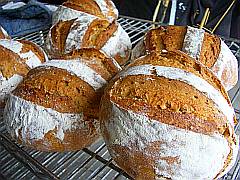 Buns from the oven
photo by Katherine Morley, May, 2005

In 2001, a retired teacher named Elizabeth Harris started the city's first park farmers' market at Riverdale Park, on Tuesday afternoons. Because a few of us had started baking bread in the Dufferin Park ovens, Elizabeth asked us if we'd come over and show the market customers what wood-oven bread tastes like. Riverdale Park by that time had built its own wood oven, but it was new enough that not many people knew about using it yet. So a few of us began to bake organic bread - three kinds - and take it to the farmers' market every Tuesday in the summer to sell it. Soon people began to line up at our table before we had even unloaded our bread. We often sold out in half an hour, even though we struggled to increase our output. That lasted to the end of the market season, in October. (One memorable baking day was Tuesday September 11, 2001. As the news of the World Trade Center attacks was coming in, the bread was waiting to be baked. We couldn't stop baking, not even to watch TV. We contemplated bailing out and just throwing the ready dough in the trash, but that didn't seem like a good thing to do either. So we just kept baking.)

The following summer some of Dufferin Grove's part-time summer park staff augmented their hours by baking for the Riverdale market again. Then in November, we started another farmers' market at our park, on Thursdays. The part-time staff kept on baking for this market, which meant that we could earn enough money to keep them working at the park between the summer season and the rink season.

So: at a time of tight budgets for parks, baking bread as a fundraiser is one piece of a solution to keeping staff in a park.